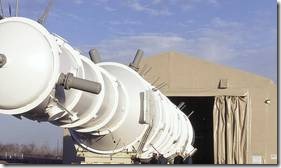 An Air Products’ “heat exchanger,” which weighs more… (SPECIAL TO THE MORNING CALL,…)

A huge white NASA rocket two-thirds the length of a football field.

Well, it looks like a rocket. In fact, the resemblance is purely accidental. The massive cylindrical object is something else entirely — a heat exchanger. And weighing in at more than 500 tons, it will never be airborne.